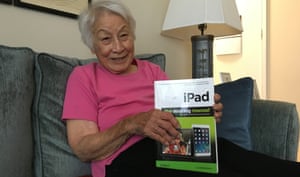 Excerpt from this article (thanks Paul M for the link!):

It’s hard to find much tech reporting that focuses on the centenarian market. Certainly there is a large industry developing assistive technologies for the ageing baby boomer generation, but you’re unlikely to read a review of the new iPhone 7 that queries how 102-year-old women with hearing aids and arthritic fingers will handle the slim new design and wireless AirPods.

…So I decided to interview my grandmother to get a century’s worth of perspective on the latest innovations.

The stuff she already uses
…Today, our family is also widely dispersed geographically (she has great-grandchildren living in Boston, Massachusetts and Durban, South Africa), but she keeps in touch by email (like any self-respecting techie, she has a Gmail address) and Skype.

She does most of her shopping online, preferring to try clothes on at home rather than in a cramped dressing room.

If she misses the 3pm airing of the PBS NewsHour with Gwen Ifill (“I get very annoyed if somebody calls me at that hour,” she said), she watches it online.

She also bowed to necessity and purchased a cellphone about 10 years ago, though she almost never uses it. “It’s only for emergencies,” she said of her flip-phone.

The stuff she doesn’t use
A few years ago, my sister bought my grandmother an iPad, in the hopes that its intuitive design would make it easier for her to get online. But the problem with the touch screen is that it requires a steady touch.

My grandmother’s hands show her age in a way that her face does not. It is difficult for her to straighten her fingers enough to place her finger pad on the screen.

…She is also wary of social media. In 2008, at the behest of my sister, she joined Facebook, but she’s never taken to it.

“People come on Facebook and they talk about so many things that are irrelevant,” she said.