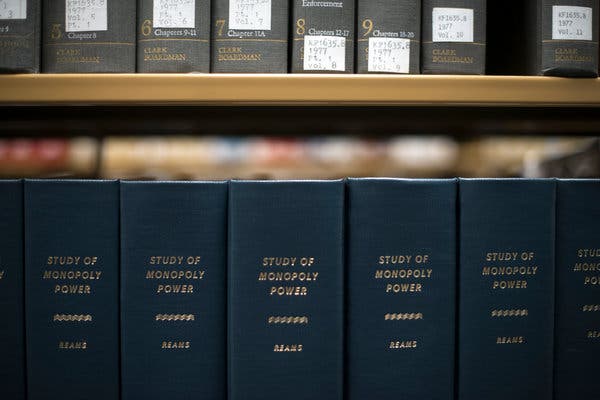 In early 2017, when she was an unknown law student, Ms. Khan published “Amazon’s Antitrust Paradox” in the Yale Law Journal. Her argument went against a consensus in antitrust circles that dates back to the 1970s — the moment when regulation was redefined to focus on consumer welfare, which is to say price. Since Amazon is renowned for its cut-rate deals, it would seem safe from federal intervention.

Ms. Khan disagreed. Over 93 heavily footnoted pages, she presented the case that the company should not get a pass on anticompetitive behavior just because it makes customers happy. Once-robust monopoly laws have been marginalized, Ms. Khan wrote, and consequently Amazon is amassing structural power that lets it exert increasing control over many parts of the economy.

Amazon has so much data on so many customers, it is so willing to forgo profits, it is so aggressive and has so many advantages from its shipping and warehouse infrastructure that it exerts an influence much broader than its market share. It resembles the all-powerful railroads of the Progressive Era, Ms. Khan wrote: “The thousands of retailers and independent businesses that must ride Amazon’s rails to reach market are increasingly dependent on their biggest competitor.”

The paper got 146,255 hits, a runaway best-seller in the world of legal treatises. That popularity has rocked the antitrust establishment, and is making an unlikely celebrity of Ms. Khan in the corridors of Washington.