So why is an algorithm’s blunder so gratifying? As of yet, AI hasn’t quite mastered being human, which is why chatbots make for such awkward conversationalists. But as technology continues to advance – from bots that are equipped with a sense of humour to virtual assistants that can flirt with their bosses – people are starting to feel uncomfortable with their own role in the AI-human dynamic. This manifests in a phenomenon coined by German psychologists Stein and Ohler as ‘the Uncanny Valley of the mind’.

As human-bot interaction becomes increasingly common, fears over the future of robotics are spiking; two-thirds of Americans are worried that machines will have taken over human jobs by 2065, and they’re more scared of robots than they are of death. So when there’s a glitch in an AI system, it reminds people that they, as humans, are safe in their own supremacy – and still one step ahead of the automatons.

I CAN'T GET ENOUGH OF THESE AI PROBLEMS. pic.twitter.com/ntNVezropW 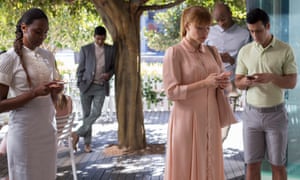 Few shows have wormed their way into the nation’s collective nightmares like Black Mirror, the new series of which premieres on Netflix from next Friday. Over two Channel 4 series and a feature-length Christmas special, Black Mirror has depicted unpleasant scenarios from the not-too distant future, in a way that has at times felt almost eerily prophetic.

…The new Netflix series duly opens with Nosedive, a “horrible comedy” set in a world where everyone is scored out of five. Like the best near-future satire, it resonates with our own present-day social media experience. So what can we learn from it and the rest of the series, in order to make sure Black Mirror doesn’t become a reality? We asked Charlie Brooker to stand in judgment on present-day tech issues: from hacking to Pokémon GO, and tell us where we need to watch our step…

Fred Brown, founder and chief executive of Next IT, which creates virtual chatbots, said his company learned firsthand the importance of creating a computer with a sense of humor when he asked his 13-year-old daughter, Molly, to test Sgt. Star, the Army’s official chatbot, which allows potential recruits to ask questions about the Army, just as you would in a recruiting station.

Molly was chatting with Sgt. Star when she looked up and said, “Dad, Sergeant Star is dumb.” When he asked why, she said, “He has to have a favorite color, and it can’t be Army green.”

Turns out, more than a quarter of the questions people ask Sgt. Star have nothing to do with the Army after Next IT programmed it with more human answers.

People trust the machine more if it has a personality, especially a sense of humor, and not just the ability to answer the question correctly, Mr. Brown said.

She is known as Xiaoice, and millions of young Chinese pick up their smartphones every day to exchange messages with her, drawn to her knowing sense of humor and listening skills. People often turn to her when they have a broken heart, have lost a job or have been feeling down. They often tell her, “I love you.”

“When I am in a bad mood, I will chat with her,” said Gao Yixin, a 24-year-old who works in the oil industry in Shandong Province. “Xiaoice is very intelligent.”

Xiaoice (pronounced Shao-ice) can chat with so many people for hours on end because she is not real. She is a chatbot, a program introduced last year by Microsoft that has become something of a hit in China.

…Researchers say there may be cultural reasons to explain the popularity of a program like Xiaoice. Michelle Zhou, a former IBM research scientist who is now the chief executive of Juji, a Silicon Valley start-up that generates personality profiles from social media interactions, said Chinese people have far more face-to-face interactions every day than most Americans.

“When Chinese come to the U.S., they feel the country is very quiet,” she said. And so, she added, a chatbot like Xiaoice might offer users a sense of personal space that is otherwise difficult to find in a densely populated society.

Dr. Zhou, who worked for several years in an IBM research laboratory in China, added that her friends had found unexpected, practical uses for Xiaoice, such as providing the illusion of proof for parents that they were in a relationship.

“Here, parents wouldn’t force their children to find a mate,” she said. “In China, if you’re 26 without a boyfriend or girlfriend, they were immensely worried.”

…“When you are down, you can talk to her without fearing any consequences,” said Yang Zhenhua, 30, a researcher who lives in the east coast city of Xiamen. “It helps a lot to lighten your mood.”

Tech companies like Apple, Google, and Microsoft are making calculated bets that intelligent personal assistants are the future… The most obvious similarity among many digital personal assistants is that they sound like women, even though our robot friends are decidedly gender neutral… Many of these helper bots also have distinctly feminine voices to go along with their girly names.

Obviously, these companies want us to think of our disembodied servant companions as women. Since most of these programs end up doing what amounts to secretarial work, that fits into cultural stereotypes of who should be doing that kind of work…

Photo: A Shiba Inu named Kuma looks at an Aibo robot dog that wanted to play at the Kofuku-ji temple in Isumi, Chiba prefecture on January 26, 2015. Toshifumi Kitamura/AFP/Getty

In 1999, Sony launched a robot dog named Aibo in the U.S. and Japan that not only responded to external stimuli, but was able to learn and express itself.

…Despite the loyal fanbase, Sony decided to discontinue the bot in 2006, after selling around 150,000 units… For years following the announcement, Sony would repair Aibos that experienced technical difficulties. But in July 2014, those repairs stopped and owners were left to look elsewhere for help.

…While concerted repair efforts have kept many an Aibo alive, a shortage of spare parts means that some of their lives have come to an end. The following images show the funerals of 19 Aibos that engineers at A-Fun were unable to save.

…”It’s not at all unusual for people to develop strong emotional attachments to non-living objects or machines,” says cyberpsychologist Eleanor Barlow, giving the common examples of naming a car, or a child becoming attached to a doll. “Research suggests this can happen in order to satisfy a need in us…to care for something to improve our own sense of well-being or by way of a child substitute.”