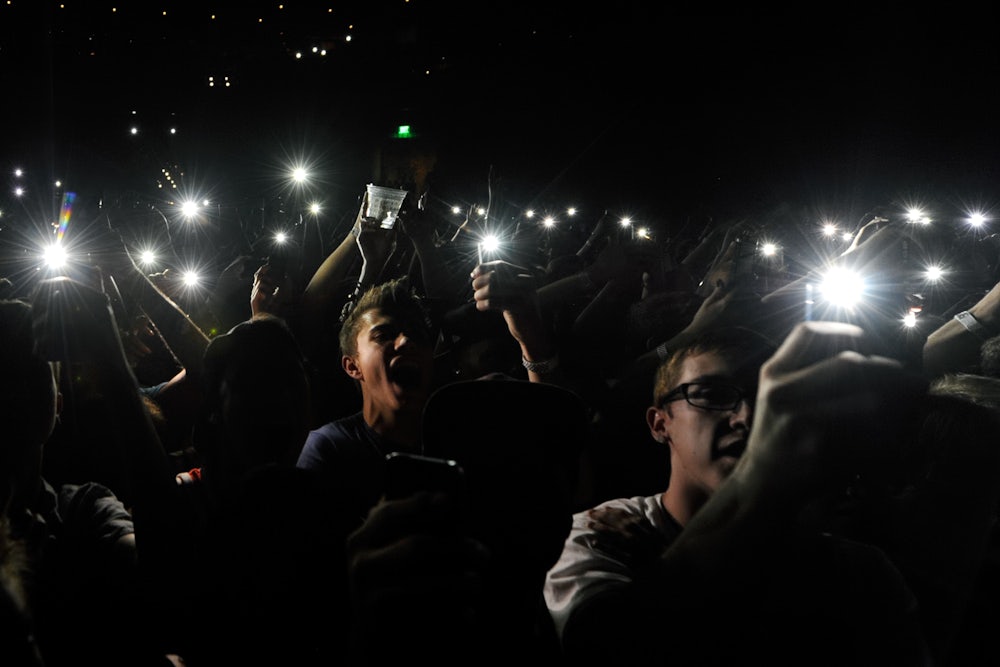 Two new books assess the quality of our digital lives: How do we shake off the village when we carry the world in our pocket?

Early on in The Attention Merchants, Tim Wu’s startling and sweeping examination of the increasingly ubiquitous commercial effort to capture and commodify our attention, we are presented with a sort of cognitive paradox: To pay attention to one thing we need to screen other things out. But that very “capacity to ignore,” as Wu puts it, “is limited by another fact: We are always paying attention to something.” It is these “in between” moments, when our attention may be about to shift from one thing to another, that the attention merchants have long sought to colonize—in everything from nineteenth-century Parisian street posters to the twenty-first century’s “long flight of ad-laden clickbaited fancy.”

… We are these days, suggests Laurence Scott in his pensive, provocative book, The Four-Dimensional Human, “inhabiting space in a way that could be called four-dimensional.” The lines between the physical and online—still so robust when getting on AOL for one’s five hours a month meant an aching process of dialing up a working local access number via a creaking modem—have been virtually erased. We no longer “surf” the internet, Scott notes, because we are always already submerged by the waves.

One of the implications here is that it is not only looking at the screen that consumes our attention, as in the old days, for the screen has changed the way we look at the world. It is the way we think of Twitter excerpts as we read an article, or pre-frame the world in Instagram-worthy moments—as Scott notes, our phones “consume” concerts and dinner before we do, while “the real, biologically up-to-the-minute ‘me’ thus becomes a ghost of my online self.” It is our strange view, intimate yet indirect, of people’s Potemkin collages on Facebook—“a place of full-frontal glimpses, where we encounter the periphery head on,” writes Scott. It is the way we worry offline about what has happened online (Did my post get any likes?), and how what is online can cause us to worry about what is happening offline. A friend recently told me how his teenage daughter had not been invited to the weekend gathering of a few of her friends. At one time, the snub, hurtful though it may have been, would have been encountered only on Monday morning (You guys did what?); now, however, she watched her friends’ weekend unfold on Instagram, a live crawl of social anxiety.

This article in The Economist offers a review of two new books, including “American Girls: Social Media and the Secret Lives of Teenagers.” by Nancy Jo Sales. Here is an excerpt:

For many girls, the constant seeking of “likes” and attention on social media can “feel like being a contestant in a never-ending beauty pageant”, writes Nancy Jo Sales in “American Girls”, a thoroughly researched if sprawling book. In this image-saturated environment, comments on girls’ photos tend to focus disproportionately on looks, bullying is common and anxieties about female rivals are rife. In interviews, girls complain of how hard it is to appear “hot” but not “slutty”, sexually confident but not “thirsty” (ie, desperate). That young women often aspire to be titillating should not be surprising given that the most successful female celebrities often present themselves as eye-candy for the male gaze. “Everybody wants to take a selfie as good as the Kardashians’,” says Maggie, a 13-year-old.

Such self-objectification comes at a cost. A review of studies from 12 industrialised countries found that adolescent girls around the world are increasingly depressed and anxious about their weight and appearance.

…Stories in The Dark Net detail a murky world beneath the familiar “surface web” of Google, Facebook and Twitter. Jamie Bartlett, Director of the Centre for the Analysis of Social Media at think tank Demos, is an expert guide. For years he immersed himself in a culture where emails are encrypted, Internet browsing is untraceable, and payments are made using faceless Bitcoin systems.

…Yet the book is not intended as an expose so much as an exploration of this underworld. At the heart of The Dark Net is the “crypto war” for privacy in cyberspace – recently thrown into sharp relief by Edward Snowden’s revelations of the Internet snooping programmes of US and UK intelligence services. Bartlett tells the history of the libertarian “cypherpunks” who for 20 years have fought for anonymity and personal liberty on the Internet.

…Acknowledging the creativity on the dark web, Bartlett says: “For every destructive sub-culture I examined there are just as many that are positive, helpful and constructive.”

…In his author’s note, Bartlett admits “readers may question the wisdom of writing about this subject at all, and express concern at the information”. But he shines an invaluable light on a world that remains determinedly opaque.