When your friend builds a facial recognition device to alert them that cat needs in. 💯💯💯 pic.twitter.com/PP9ndmO0Ba

CV Dazzle explores how fashion can be used as camouflage from face-detection technology, the first step in automated face recognition.

The name is derived from a type of World War I naval camouflage called Dazzle, which used cubist-inspired designs to break apart the visual continuity of a battleship and conceal its orientation and size. Likewise, CV Dazzle uses avant-garde hairstyling and makeup designs to break apart the continuity of a face. Since facial-recognition algorithms rely on the identification and spatial relationship of key facial features, like symmetry and tonal contours, one can block detection by creating an “anti-face”. 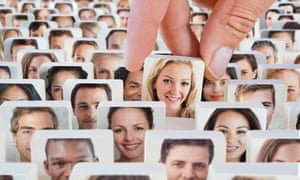 If the founders of a new face recognition app get their way, anonymity in public could soon be a thing of the past. FindFace, launched two months ago and currently taking Russia by storm, allows users to photograph people in a crowd and work out their identities, with 70% reliability.

It works by comparing photographs to profile pictures on Vkontakte, a social network popular in Russia and the former Soviet Union, with more than 200 million accounts. In future, the designers imagine a world where people walking past you on the street could find your social network profile by sneaking a photograph of you, and shops, advertisers and the police could pick your face out of crowds and track you down via social networks.

… Kabakov says the app could revolutionise dating: “If you see someone you like, you can photograph them, find their identity, and then send them a friend request.” The interaction doesn’t always have to involve the rather creepy opening gambit of clandestine street photography, he added: “It also looks for similar people. So you could just upload a photo of a movie star you like, or your ex, and then find 10 girls who look similar to her and send them messages.”