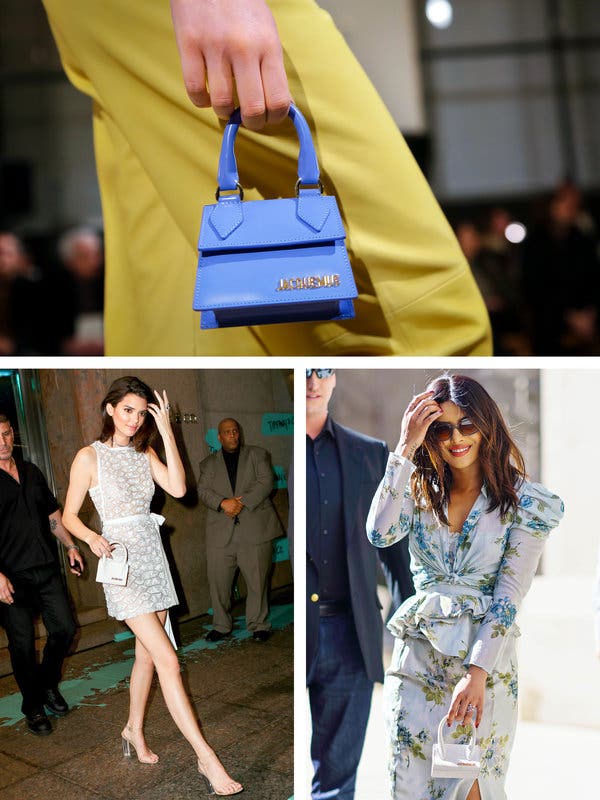 Struggling to unplug? There’s an accessory for that. Purses too small to fit a phone are the biggest thing in handbags these days, spotted on the dainty wrists of celebrities and Instagram influencers clogging up the feed. Micro-bags have trended before in fashion, but styles like the Jacquemus Insta-famous Chiquito have taken it to new (tinier) levels. Measuring just 3.1 inches tall, 4.7 inches wide and 2 inches deep, the Chiquito won’t accommodate much more than your lipstick and credit card, to say nothing of your phone.

CV Dazzle explores how fashion can be used as camouflage from face-detection technology, the first step in automated face recognition.

The name is derived from a type of World War I naval camouflage called Dazzle, which used cubist-inspired designs to break apart the visual continuity of a battleship and conceal its orientation and size. Likewise, CV Dazzle uses avant-garde hairstyling and makeup designs to break apart the continuity of a face. Since facial-recognition algorithms rely on the identification and spatial relationship of key facial features, like symmetry and tonal contours, one can block detection by creating an “anti-face”. 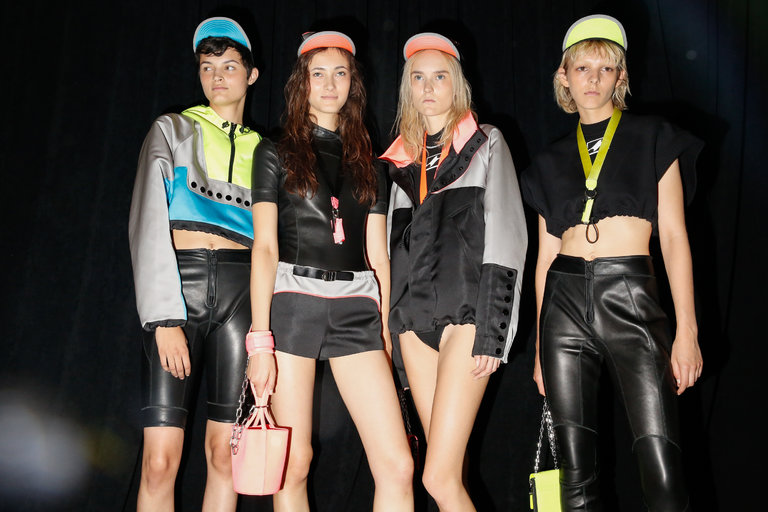 We live in a time of bifurcation and oppositions: Trump vs. Clinton, the one percent vs. the 99 percent, globalism vs. isolationism. So it shouldn’t be a surprise to any of us, really, that fashion is right on trend. There’s a rift opening in New York Fashion Week, with big blowout extravaganzas facing off against quieter, more traditional collections; hashtag hoo-has against analogue outreach. It’s an either-or moment.

On Friday night Tommy Hilfiger invited a few thousand people (plus Taylor Swift) to the “Tommy Pier” at the South Street Seaport for #TOMMYNOW, where he recreated a funfair complete with Ferris wheel, tornado ride, lobster rolls, temporary tattoo parlor and pop-up digital kiosks, the better to frame his see-now, buy-now fall collection, made in collaboration with the model and social media magnet Gigi Hadid.

Museums are clearly paying attention to the impact of technology on fashion, with “#techstyle” on view at the Museum of Fine Arts, Boston, through July 10, and “Manus x Machina: Fashion in an Age of Technology” opening at the Metropolitan Museum of Art in New York on May 5. The design curator Ron Labaco has witnessed a wider institutional acceptance of this trend just since he included a few digitally produced works of fashion in his 2013 exhibition “Out of Hand: Materializing the Postdigital” at the Museum of Arts and Design in New York.

When Mr. Labaco was organizing that show, he said he was told by a director of a European fashion museum, “There isn’t enough significant movement in the direction of digital fabrication in fashion to even warrant a chapter in the catalog.”

Mr. Labaco said, “Now we’re moving away from the idea that this is a novelty that is just a flash in the pan, to artists who are really dedicating their lives to exploring what is possible.”

The Museum of Fine Arts commissioned a version of the “Twitter dress” from the London-based CuteCircuit. Visitors can send tweets from their phones, or artworks from the museum’s collection (selected on an iPad attached to the display) that will then appear across the 10,000 micro-LEDs in the dress’s fabric (and it’s machine-washable).

“Social media is the laxative of the fashion system,” said Scott Galloway, the founder and chairman of the digital consultancy L2. “It makes everyone digest everything much faster: trends, product discovery.”

The digital world has schooled an entire generation — called the IWWIWWIWI generation (I want what I want when I want it) by the New York consultancy Open Mind Strategy — in immediate gratification. Though the Twitter-Instagram-Facebook-Snapchat nexus started as a golden promise, a way for brands to seize control of their own messaging and cut out the middlemen of retailers and critics and communicate directly to their customer, it has created a situation in which it is no longer acceptable to many women to wait six months for something they have just seen. Especially if they can get an acceptable simulacrum at a fast-fashion brand down the street, like Zara or H&M, which was able to spot the garment via pictures and measure its success via the number of “likes” it achieved.

And this has been confused further by the back-and-forth promotion of what is shown on the runway (products for the next season) versus what is in stores (products from the current season), and exacerbated by the rise of precollection marketing in between.

“In the past, we used to see a dramatic spike of sales when the collection was delivered to stores; that trend is no longer really the case,” said Paolo Riva, the chief executive of DVF.

Sarah Rutson, the vice president for global buying at Net-a-Porter, said: “Our psyche has changed. It is all about immediacy.”

Princeton Cannon-Roberts, 5, being photographed by his mother, Keira Cannon, left, and a professional photographer, Daisy Beatty, for his Instagram account, Prince and the Baker. He has more than 5,600 followers. Credit Hilary Swift for The New York Times

He is 5 years old. A happy-seeming little boy, he played with his scooter, balanced on the curb, twirled in endless circles but only had so much tolerance for the professional photographer whom Ms. Cannon, 38 and a pastry chef, had hired to populate his Instagram feed, Prince and the Baker, which has more than 5,600 followers.

When the photographer attempted to coax him to pose for one more shot with the Brooklyn Bridge behind him, he gave her a polite, “No thanks.” It didn’t help that children were riding past him on scooters of their own, or bicycles.

Once the half-hour shoot was over, Ms. Cannon posted multiple photos of Princeton in the outfit on the Instagram feed, tagging the Canadian online shop, the Mini Life, that had provided it, and the brands included. In return, she would get a shopping discount and keep the clothing, worth about $350.

During busy seasons, she receives such packages weekly. Depending on the brand, Ms. Cannon will sometimes earn a payment of $50 to $100 per post, she said, adding that L’Officiel Enfant, a showroom in Midtown, once paid her $250 for a look-book shoot.

When it comes to this collaboration, the Geofilter is activated when a customer enters one of Lilly’s 31 corporate stores (including the Madison Ave location). Then they will be able to access a custom-made brightly printed geo-filter that will link to their phone automatically. All the customer needs to do is swipe left once the app is open, and the Lilly filter will be first, whereas if you swipe right it will be last after the default time/temperature filters.

Users can then play around with the patterns to use on the Snapchat application in a way that’s never been done before, adding them to selfies and group shots. Users have the option to send the finished Snapchat to a select group of friends, post it to their Snapchat story for followers to view for the next 24 hours or just save it to their phone as a keepsake.

Fashion trends, like TV shows, used to be presented as one-way conversations, but consuming fashion today is a social activity, says Asos daily content editor Daniell Radojcin. “Now girls can interact with a video by liking it, they can post a comment on it, they can share it with their friends on their social media feed,” she says. “Our consumer is far more likely to react to a Suki Waterhouse selfie from the front row of Chanel than an anonymous model walking on the Chanel catwalk”.

… Kingham says she thinks about whether pieces are “instagrammable” before signing up a new designer because fashion that is visually eye-smacking is easier to capture online than more subdued pieces. Footwear label Joshua Sanders and swimwear label Kiini are two recent examples of brands she has taken on thanks to their instant visual appeal. Julia Fowler, co-founder of retail analytics company Editd, agrees that consuming fashion through social media is changing what we buy: “We’ve noted block colours, contrasting prints and eye-catching embellishments perform well, whereas the softness of a cashmere sweater is much harder to communicate.”

… “We are living in an age of instant accessibility and information democracy,” agrees Topshop’s Markham. “Everything we do is driven by our customer who has a constant appetite for newness and approaches trends with a desire to buy and wear now”. It’s not just high street retailers; design houses like Burberry and Moschino capitalise on online buzz by making sure that pieces seen on the catwalk and worn by front row A-listers are available to buy immediately.

If you’re guilty of always taking selfies in the fitting room to send to your closest friends for a group consensus before making a big purchase, Karl Lagerfeld is cutting half the legwork out for you.

The Kaiser, who just unveiled his first retail store in London for his eponymous label, has installed a photo booth in the dressing room of his chic boutique so shoppers can snap selfies with ease and share on their social media feed in one fell swoop.