For  Tami Reiss, the inspiration for Just Not Sorry—the new app she created that aims to stop women from resorting to undermining phrases in emails—was all over her inbox.

When installed as a Chrome extension, the app underlines words like “just,” “sorry,” “I think,” and “does this make sense” in shame-y crimson red digital ink. Already, thousands have downloaded the plug-in.

“It came to me from a variety of places,” Reiss says. “One, I like to build things that actually help people. Two, years ago, I did this influencer training and part of what we learned there was about what they called structural influence…which is that you can create an environment that supports positive change. It’s like, ‘Don’t put a stumbling block in front of a blind person,’ but the opposite. How do you create an environment that helps people know what they should be doing? How do you make it easy for them to make good choices?” Reiss looked around at the data and the op-eds and the shampoo ads and that Amy Schumer skit and at a million more meditations on how and why women say they’re sorry. And she decided to do something about it.

See also this counterpoint, excerpted from the article “The Just Not Sorry app is keeping women trapped in a man’s world”:

I’m sorry to do this to you but this is yet another piece on “Just Not Sorry” because I just don’t quite get it, apologies. I know you’re busy, so I’ll keep it brief. Here is my problem: when did being polite become a bad thing?

Excerpt from this article (and see also this one for background):

Trump’s tweet went thus: “Despite the constant negative press covfefe”, and that was it. Keyboard detectives have pointed out that the strokes needed to type “erage” are vaguely similar to “fefe”, and that would fit semantically with the rest of the brainfart. So, boringly enough, he meant to type “coverage”. But it was too late. Covfefe was born.

And with it, the new discipline of Covfefe studies.

The oldest written language in the world didn’t have an alphabet. When written language began, it wasn’t used to ‘sound out’ words the way many writing systems do today; instead, each symbol represented a word (or occasionally part of a word). If that sounds familiar to you, it’s probably because speaking with pictures is a familiar concept — modern Chinese (hanzi) is a kind of logographic writing system, as is Japanese kanji. Younger readers, of course, may jump to an even more modern example of a logographic writing system — stickers.

There has been a lot of ink spilled about how stickers and emoji are bringing about the death of modern communication, but that draws an incorrect (and Western-biased, and frankly kind of racist) parallel: that language evolved from a logographic language (hieroglyphics, say) into an alphabetic language (English). In point of fact, English didn’t evolve from a logographic system at all; it’s a cousin, not a child. And Mandarin, whose billion active speakers make it the single most spoken language in the world, uses a syllable-based logographic language system.

Now, linguists may object to the classification of emoji as a logographic writing system.

Two elementary school students in California have proven that friendship can go beyond any language barrier.

One day at school, Amanda Moore noticed a classmate, Rafael Anaya, eating lunch alone. When she spoke to him, she noticed he didn’t speak much English. That’s when she decided she’d simply communicate with a note instead. According to CBS News, Amanda used Google Translate to write a letter in Spanish to Rafael and asked her mom, Kimber Kinard, to proofread it.

The heaviest users of Facebook believe that other people are happier. News feeds contain numerous “envy-inducing incidents,” and the more you skim, the more you compare yourself to others, leading to “invidious emotions.” Looking at your friends’ babies and vegetables might seem like a good idea at the time, but all those Anne Geddes shots will probably just make you sad.

But “sad” isn’t nearly a nuanced enough word for the confusing concoction of emotions at play. It’s sadness borne of envy—because your friend has what you want. Even acknowledging such envy can make you sadder, because you realize that underneath the jealousy, you really are genuinely happy for your friend. And there’s self-disappointment in the mix: You should be able to rise above your own jealousy, right? Aren’t you a good friend?

…This word doesn’t appear to exist in the English language, and a quick survey of world languages didn’t uncover it. The feeling turns “schadenfreude” on its head: Instead of happiness over others’ misfortune, it is closer to sadness over others’ success. I’m not a fan of clumsily flipping “schadenfreude” around and calling it freudenschade—although many have had this idea before. Perhaps if we made it freundenschade, layering in the German word for “friend”?

A close pal, upon being informed of the topic of this post, had an immediate, great suggestion: “frenvy.” But it turns out that someone else on the Internet already came up with that word. (I was relieved, as I’d loved the term immediately, and was a little bit jealous—frenvious?—that he, not I, had dreamt it up.) 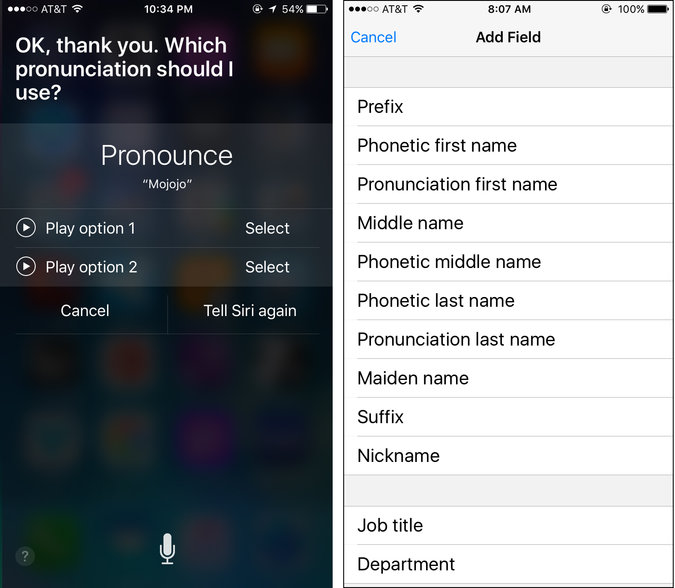 Like humans, Apple’s virtual assistant can sometimes stumble over names that don’t read the same way they sound when spoken aloud. But as with humans, you can tell Siri the proper pronunciation of the name for future reference.

The next time Siri mangles a name, tap the microphone button and say, “That’s not how you pronounce [Name].” The program should respond with, “O.K., how do you pronounce the name [Name]?” Say the correct pronunciation of your first and last name as clearly as you can.

Siri will then fire back with, “O.K., thank you. Which pronunciation should I use?” and offer a few variations of your first name to play back. After you have listened to the choices, tap Select next to the one you want and then move on to Siri’s attempts to pronounce your last name.

The struggle of being Irish and trying to say "third" to Siri pic.twitter.com/QsTBQCoIhu

Check out examples on this site, and then check out OgilvyDo for this article about Siri’s problems with understanding spoken accents.

How you start an email reveals a lot more about your intentions than you know. Common e-greetings for etiquette voodoo.

“Hey,” means you want something from me.

“Hey:” means you expect something from me.

“Greetings:” denotes that I signed up for your dreadful boutique’s mailing list in hopes of impressing somebody in the store, and now I resent all of the parties involved, myself most of all.

“Hello” signifies that you spent too much time thinking about everything that follows, or that you are high.

“Hi!” means I’m going to delete your email without reading it.

“Dear,” expresses that—despite your outdated AOL address and the hundreds of forwarded conspiratorial rants in your Sent folder—this is only the third email you’ve ever sent and the details are better suited for our upcoming family get-together.

Excerpt from this article on email sign-offs:

“XOXO”: Contrary to popular belief, this does not mean “hugs and kisses.” If anything, it’s intended to convey light affection, like a pat on the butt from a Texan aunt. You shouldn’t take it as anything more.

“XOX”: This indicates full, throbbing, sexual desire. The person who signs off this way is hoping that you’ll picture her naked silhouette playing the saxophone in some mist.

“XO”: This is like when you lean in to kiss your Texan aunt on the cheek but you both turn the wrong way and kiss on the mouth.

“X”: This is a simple, respectful nod, indicating that everything is going absolutely fine.

“Thanks”: This is completely sarcastic.

“Sincerely”: This is the way Abraham Lincoln always signed off, so take that for what it’s worth.

“Peace out!”: This person probably has an earring in the shape of a turtle, and tries to get everyone to notice it.

It is impossible to know what new words will become fashionable in the year ahead: some of the buzzwords of 2016 have not yet been coined. But a few of the trends likely to shape the year are apparent, and they provide hints about the vocabulary that may be in vogue.

Technology is a reliable source of new words. Many of them jump from noun to verb, as “fax”, “e-mail”, “Google” and “Face­book” did. Whichever social network, say Slack (office-workers) or This (long-form journalism aficionados), becomes a breakout darling can expect its name to become an ordinary verb (“Slack me later”). One to watch is Venmo, which lets people send each other small payments (“Just venmo me”).

Some companies fight the “genericide” of their trademarks. Adobe, for example, campaigned to replace “to photoshop” with “to enhance using Adobe® Photoshop® software”. But they are powerless to stop it.