Over the past year I’ve noticed a shift in tone among the mom-influencers I follow on social media. They’re fed up with feeling judged by other moms. Other moms — ordinary moms like me, it would seem — are full of negative feedback about their choices. But no matter, because these moms want to reclaim and celebrate their flaws. They’re #perfectlyimperfect members of the #motherhoodrising #mamarazzi and they’re sharing their authentic, unfiltered #motherhoodunplugged, #candidchildhood moments. There are nothing but good intentions behind these hashtags, but as I’ve scrolled through them, I’ve pondered the obvious question: This is supposed to be imperfect? Did someone move the goalposts and forget to tell me? 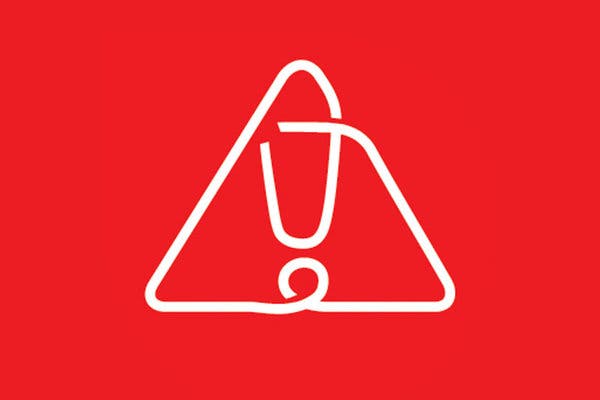 A mother’s recorded voice will wake a child and get him out the room much faster than a standard smoke alarm, a randomized trial has found.

With the mother’s voice — shouting names, instructions or both — almost 90 percent of the children awoke and were out of the room in an average of under 30 seconds.

Unfortunately, though, mommy shamers were quick to pounce on the new mom of five.

Many judged her drink of choice, but most called her out for not being more present with her just-born baby. One commented sarcastically, “it’s important to check your phone right now.” Another wrote, “she’s obviously googling parental advice.”

Although most of the negative comments were deleted, her legion of fans stepped in, sharing not only that she earned that hard-fought soda but that there was likely a very good reason she was on her phone. 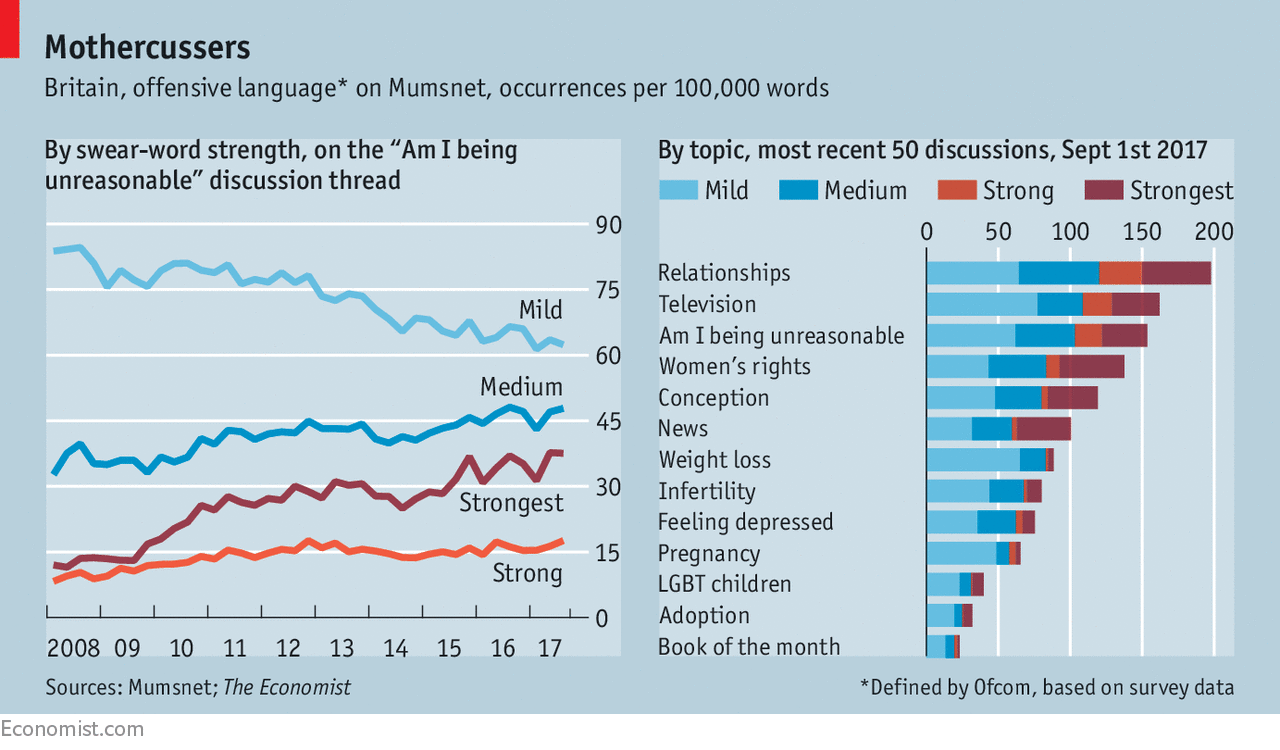 Such streams of expletives are causing trouble for Mumsnet. On August 19th the Times reported that sponsors were threatening to pull adverts from the website. Among them were Confused.com, a price-comparison site, the National Trust, a conservation charity and Bulgari, a jeweller. They are reportedly wary of being associated with increasingly foul-mouthed mothers. Are they right to fret?

To answer this question, The Economist examined over 200,000 discussion threads from one of Mumsnet’s most popular forums. We looked for instances of the words that Ofcom, the telecoms regulator, deems offensive. The analysis does not capture every curse. Some mums choose to self-censor; others use knowing acronyms (CF, for instance, means “cheeky fucker”). Nevertheless, a clear trend emerges from the number-crunching: swearing is indeed on the rise.

The occurrences of what Ofcom deems the “strongest” language (think C-words and F-bombs) have tripled since 2008. Terms which it considers “strong” and “medium” have also increased, at a slower pace. This appears to be at the expense of “milder” cursing (such as “God” and “bloody”), the prevalence of which has declined by a quarter.

Unsurprisingly, nothing gets online mums more riled up than talking about their relationships. Much of this is venting about husbands’ emotional distance, flagging libido or adulterous tendencies. By contrast, debates about the book of the month elicit, on the whole, much milder language.

My mom has already found my new LA friends on social media and is smashing the like on bikini pics I'm horrified and…proud?

She has Facebook, Instagram and Twitter, which she essentially uses as intended by documenting her rad (post-retirement) life. There’s the occasional selfie with her girlfriends, dispatches from vacations and hikes, her favorite funny signs at political rallies. But the majority of her posts are homages to her children — me and my brother. She uses social media both to keep tabs on what we’re up to and to broadcast that information to her network of people. She loves to share my work (with simply the caption “Alana,” no tag) and photos of our family awkwardly squeezed into a restaurant booth and bathed in terrible overhead lighting. She also LOVES to interact with our status updates, as if they are addressed directly to her…

In one particular shot, captured in an elevator and posted to the star’s Instagram (with 2.5 million likes), Beyoncé stares fiercely into the camera, her hand placed protectively on her young daughter’s arm, as her princess dress overtakes the floor.

As you may have expected, the Bey-hive (that’s Beyoncé’s fan base) went nuts: “SLAYYYYYYY,” they commented. The photo was “everything,” they squealed. It was so fierce they were all “dying” — like, literally, physically rolling in their graves.

And then there was this response, from a variety of fans:

Like most things internet, the origin of “mom” — or at least, how most of us learned about it — can be traced to Kim Kardashian West. In 2014, when Ms. Kardashian West posed for a Paper magazine cover with her oiled backside glistening in full force, Lorde, the 20-year-old pop star, tweeted the image with only one word: “mom.”

At first, fans wondered whether she was critiquing Ms. Kardashian West. (Was she criticizing the new mom’s decision to pose naked?) Luckily, a fan wrote to Lorde’s Tumblr asking her to explain, for those of us who don’t speak internet, and Lorde set the record straight.

“I retweeted kim’s amazing cover and wrote ‘MOM,’ which among the youthz is a compliment,” she wrote. “It basically jokingly means ‘adopt me/be my second mom/i think of you as a mother figure you are so epic.’” 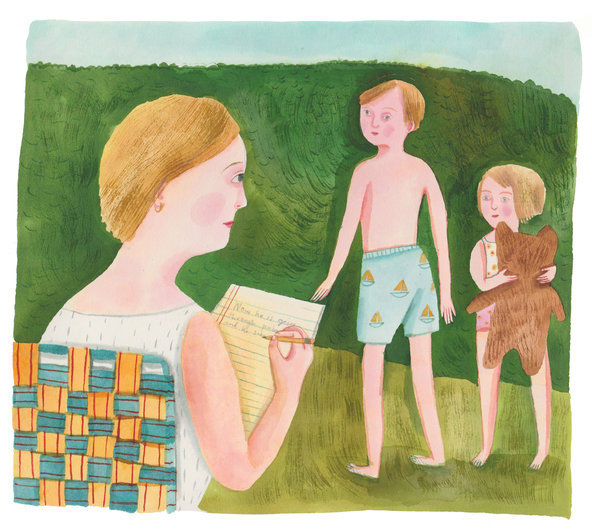 There is a hunger in our culture for true stories from the parenting trenches where life is lived mud-flecked and raw. I’ve written extensively, intimately, damningly, about my children for seven years without once thinking about it from the point of view of their feelings and their privacy. A few months ago I stopped.

I wish I could say that I deeply reflected on the ethics of writing about my children and heroically pivoted myself out of a concern for my character, but here’s what really happened: My father called.

He called me after reading a blog post I had written about my son’s first signs of puberty. It seems an obvious line-crossing that I wrote about such an intimate detail, but I did. At the time I didn’t pause for a split second; I was more than willing to go there. I had been writing and reading extensively about parenting tweens. I knew people might be mildly shocked, but mostly interested.

…I was always the narrator, the main character, even if I was also the storm-tossed heroine, the hot mess in mom jeans who couldn’t get the overalls on her 2-year-old. Or figure out fourth-grade fractions homework. I was working out my issues. My kids were always satellites to the big round-faced moon of me.

I’ve shamed their eating habits in chat rooms. I have Facebooked the things they’ve said. I have skewered them horribly, but also with great interest and affection, as a collector might do to some butterflies.

The new poster child for bad parenting is the parent texting their way through dinner, while the kids do the same.

But let’s get real. When we fret about excess screen time as bad parenting, what we’re really talking about is bad mothering. After all, mothers still do more than three times as much routine child care as fathers do, and almost four times as much solo care, according to a 2011 study by Lyn Craig and Killian Mullan.  When we worry that parents are shirking their duties by relying on an electronic babysitter, we’re really worrying that mothers are putting their own needs alongside, or even ahead of, their kids’ needs.

The mother who hands her child a smartphone is taking the easy way out of these challenges. But since so much of parenting consists of situations in which there is no easy way out, I’m deeply grateful when somebody offers me a cheat. I love being able to hand my kid an iPhone in a restaurant so we can go out for dinner on a night when nobody feels like cooking or cleaning up. I love knowing I can get a few quiet minutes for a business call — if I let the kids watch Netflix. I love being able to have an actual conversation with a friend while my kids enjoy their Minecraft time. Steve Jobs may have banned iPhones and iPads for his own kids, but I bet he would have rethought that position if he’d actually spent every day at home with them, instead of off running Apple.

There’s been a long held assumption that competition and insecurity, rather than camaraderie and support, are the driving force behind the rise of online mom culture. A new report from Pew Research Center suggests otherwise.

In short: Millennial moms are more assured in their parenting and most likely to seek advice online. This suggests that the digital-mom universe is not the cesspool of judgment it is often made out to be. Those long Facebook threads about breast vs. bottle or co-sleeping vs. sleep-training, the endless think pieces on work/life balance, the viral personal essays—they’re all part of a vast and growing ecosystem. Too often labeled as “mommy wars,” those conversations seem to be doing more to make women confident of the mothers they are, rather than demoralized by the mothers they are not.