Kendall dared me to jump over a human being on my skates and I said NO WAY but she said BELIEVE IN YOURSELF KIRBY and I said OK so I strapped on my skates and guess what… I totally jumped over a human being!!!! Even tho I scraped my entire face on the asphalt and put my friend Taco in an "accidental coma"… I had the time of my freakin life! #ThanksKendall #WeAlsoAteHotdogs #MineTastedLikeBlood

Excerpt from this article (this made me laugh out loud on this Monday morning):

The cheeky ‘shops have garnered the digital artist a rabid following of his own, and his (verified) Instagram account now boasts nearly 500,000 followers. One reason why is that his Photoshops are above-average quality. He takes time to try to match the tones and lighting and it shows.

I’d thought I’d seen it all. That was until a friend and die-hard Scandal fan direct messaged me a photo of my kids’ heads Photoshopped in with Olivia Pope and Fitzgerald Grant. She found it on a Scandal fan page and thought I should know.

…Like many bloggers, I take precautions to copyright my work, add some watermarks and disable right clicks. But sometimes it’s just not enough to deter a photo snatcher. Through the years, my photographs have popped up in interesting places. To name a few:

…In all seriousness, it’s more than a little disconcerting. People ask how I am not losing my mind over this, and the truth is, I have. I’ve tracked down and contacted numerous websites and asked for my family’s photos to be removed. I’ve sent a dozen cease and desist letters. Most came down without a response. Some came down with a profuse apology. 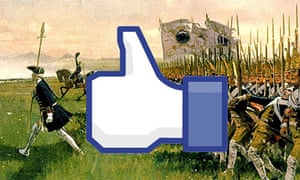 Constant Dullaart uses the internet to expose the internet. The Dutch artist, who once hunted down the first ever Photoshopped image – so he could see it before it was altered – is now taking on the ultimate champion of digital fantasies: Facebook.

He’s hiring a ghost army of 18th-century soldiers to attack the most mighty empire of today. His online art intervention, called The Possibility of an Army, will expose the ease with which fake identities can be created online. He has enlisted people to open Facebook accounts with the names of mercenary soldiers hired by Britain in the American war of independence. He is literally creating a fake army of dead men.

The integrity of all that happens online seems to be crumbling. Those reviews on Amazon? A lot are fake, according to the online retailer, which is suing more than 1,000 people for their “false, misleading and inauthentic” reviews of books and other commodities. Instagram? The myth has been blown wide open – with users queuing up to reveal sadder realities behind their images using the hashtag #socialmediaisnotrealife. Are these long overdue exposures just more internet ephemera? Or could this be the beginning of the fall of social media?

Link to full article here. See also the story of the woman who faked her Southeast Asia trip on social media.

Excerpt from the article:

If you’ve ever spent a rainy evening thumbing through your Facebook newsfeed glaring with scarcely controllable envy at the seemingly endless torrent of pictures posted by unbearably smug friends who are backpacking through some country with scenes so vibrant you wonder if the saturation setting on your screen is faulty, relax.

It could all be a backpack of lies.

…Bending reality on Facebook is hardly unusual – in fact it’s turning into something of a life skill – but Zilla’s efforts seem to have taken things to a whole new level.

The reasons behind her actions, however, are noble: it was all part of a university project, in which she wanted to show how Facebook activity is not necessarily reflective of real life.