Maybe selfies are what happen when a society sends a missive without a recipient. Like the interstellar radio broadcast “A Simple Response to an Elemental Message,” which sent human fears about the earth’s environmental destruction out into the universe and toward possible extraterrestrial life, self-portraiture today does not communicate unique truths so much as it reflects collective anxieties. But I don’t mean to bemoan social media (boring, it’s been done, everyone’s worried but no one will change). Really, I want to use that labyrinth to try to find a route back to an entirely different type of self-portraiture, one that offers an alternative (and more positive) interconnection between character, work, and the female subject.

I know such a portrait exists because I’ve seen it. I encountered it in a small gallery at Buckingham Palace, at the Portrait of the Artist exhibition last year. This painting’s texture and dimensionality immediately distinguished it from the rest of the work on display. My instinct was to touch it. What first appeared to be daubs of paint slowly revealed themselves to be stitches. This self-portrait is embroidered—thick, pastel threads so perfectly irregular as to resemble brushstrokes, instantly imprinting the creator’s individuality onto the canvas (or cloth, rather). Those hands, an artisan’s hands, are shown carefully stitching, one red thread looped loosely over the ring finger (married to her work?). What really affected me though, what I found inescapable, was the woman’s expression. She’s smiling, her eyes are bright and calm. She has a charisma that so often resists artistic capture, and her face expresses an internal life as opposed to a superficial character. This is a woman who understood the power of her work and the radical nature of depicting herself doing it. The confidence in her gaze weaves its own kind of spell, creating a sense of the artist regarding herself as she actively constructs her self-image. Enmeshed in that self-image, central to it, is the work. The work of the piece and the work within the piece are indistinguishable. 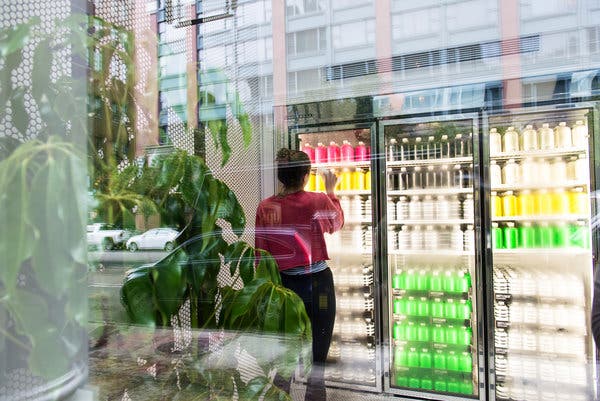 First there was self-checkout. Then Amazon’s cashier-free Go stores. Now there’s pay when you feel like it — we trust you.

At Drug Store, a narrow, black-and-white-tiled store that opened Wednesday in Manhattan’s Tribeca neighborhood, there is no cashier or checkout counter. Anyone can walk in, grab a $10.83 activated-charcoal drink and leave.

But the beverages, typically sold online by the case by Dirty Lemon, a start-up that runs the store, are not free. Dirty Lemon has made a bet that customers will pay the same way they order its pricey lemon-flavored drinks for home delivery: by sending the company a text message. 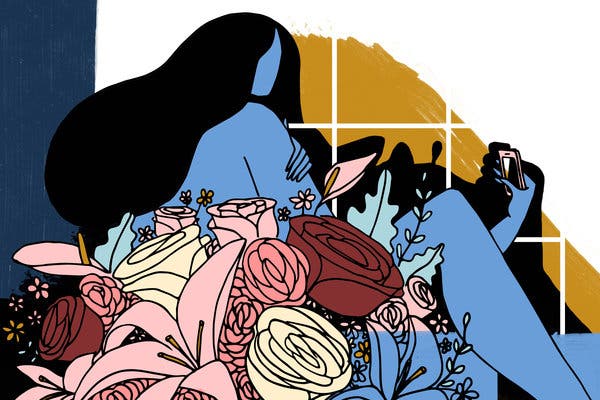 The V-selfie, though very much here, is perhaps less insistent. Shared on dating apps or in texts, it has been sent to create longing and a sense of intimacy: a missive of lust and promise to lovers, or would-be lovers, who are separated.

Sit with a straight female friend as she browses Tinder, and you’ll start to see some patterns very quickly.

Group pics where you can’t tell which guy the profile belongs to? Check.

To solve a problem, we must first understand its cause. So, why are men bad at taking selfies?

I’ve got one simple explanation: Men don’t grow up in a culture that forces them to objectify themselves. 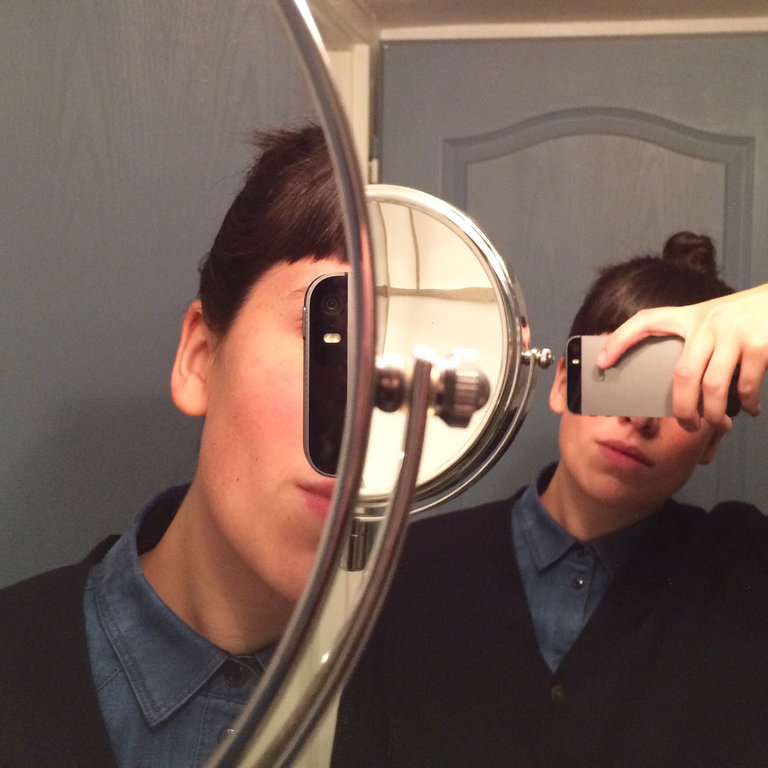 Who is it we see when we look in the mirror? And when we share selfies — and I post photos of myself all day long, I admit — what version of ourselves is it we are sharing? In the stranger’s case, a selfie represented, more than anything else, a work of the imagination. 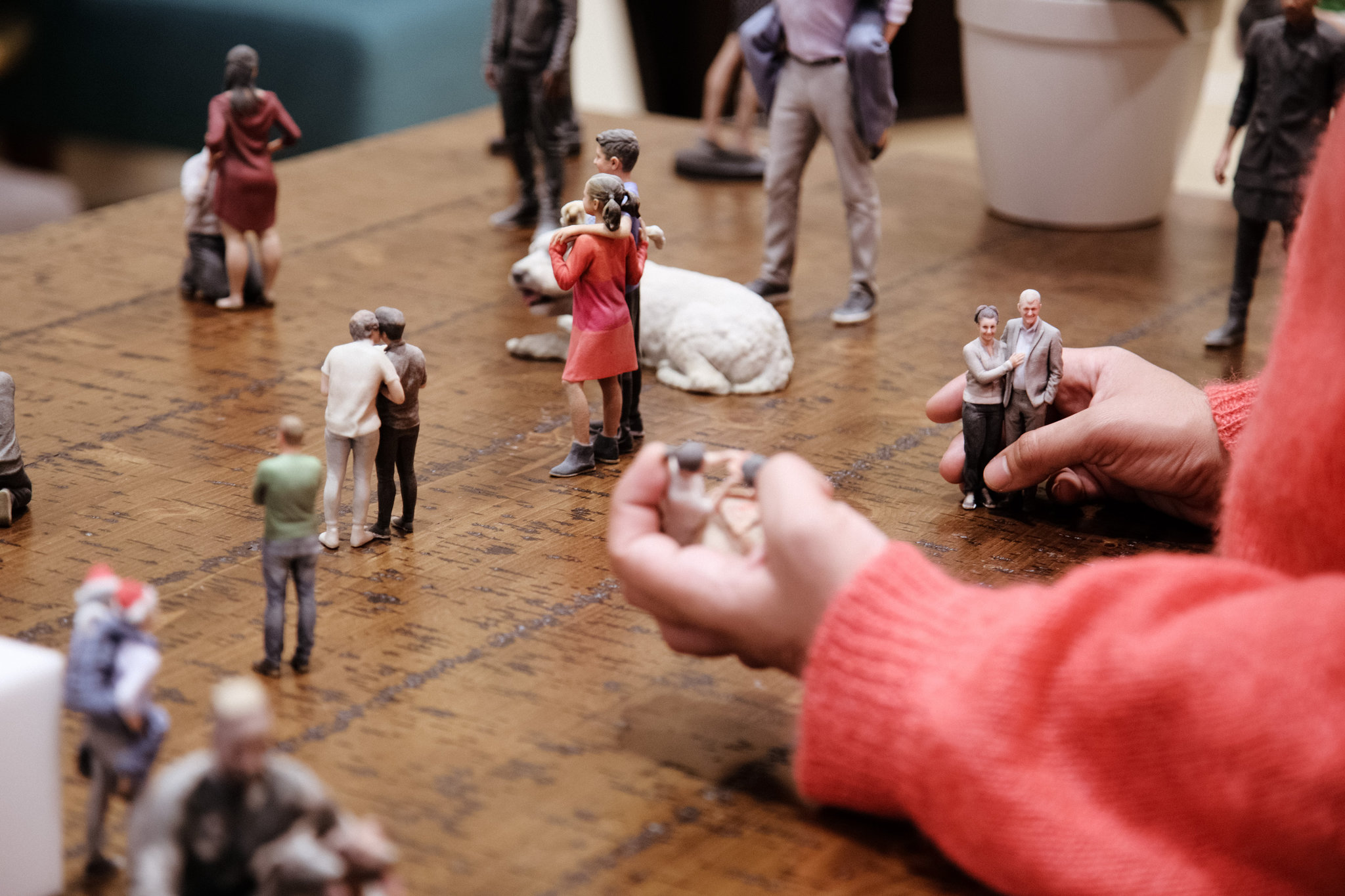 “People use the term ‘3-D selfie’ a lot. It really isn’t that,” said Michael Anderson, the chief executive of Doob USA. “We refer to them as 3-D-printed replicas.”

Doob, which was founded five years ago and whose headquarters are in Düsseldorf, Germany, is betting big that people want to see themselves made small: smiling alone; hugging their spouses in an eerily perfected version of the old wedding-cake topper; astride a Harley-Davidson, tattooed arms naked to the wind. Whether you consider them cute or creepy, they are perhaps the most currently relatable example of the much buzzed-about, yet perplexing, 3-D printing.

Anastasia Makhanova, a psychologist at Florida State University, compared the profile images of users on dating sites with those on professional networking sites and noticed something strange. Women on dating sites took photos mostly from above, while men on professional networking sites took them from below. Makhanova thought it might have something to do with how humans attempt present themselves to their advantage—depending on who they think is looking at them. 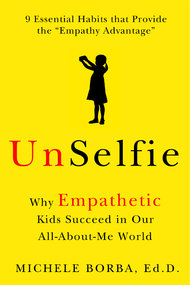 The psychologist and parenting expert Michele Borba says society’s fixation with the selfie is having some unintended consequences. She sees children mimicking not-so-nice behavior in adults and fewer grown-ups calling them out.

In “UnSelfie: Why Empathetic Kids Succeed in Our All-About-Me World,” her 23rd book, Dr. Borba combines scientific research with tales from real-world families and offers concrete tips on how to cultivate kindness.

We talked recently about “selfie syndrome,” ways to flip the focus away from the self and specific activities to build empathy in our children. Here is an edited excerpt of our conversation.

The Human–Computer Institute at Carnegie Mellon has found that your “passive consumption” of your friends’ feeds and your own “broadcasts to wider audiences” on Facebook correlate with feelings of loneliness and even depression. Earlier this year, two German universities showed that “passive following” on Facebook triggers states of envy and resentment in many users, with vacation photos standing out as a prime trigger. Yet another study, this one of 425 undergrads in Utah, carried the self-explanatory title “ ‘They Are Happier and Having Better Lives Than I Am’: The Impact of Using Facebook on Perceptions of Others’ Lives.” Even the positive effects of Facebook can be double-edged: Viewing your profile can increase your self-esteem, but it also lowers your ability to ace a serial subtraction task.