Unfortunately, though, mommy shamers were quick to pounce on the new mom of five.

Many judged her drink of choice, but most called her out for not being more present with her just-born baby. One commented sarcastically, “it’s important to check your phone right now.” Another wrote, “she’s obviously googling parental advice.”

Although most of the negative comments were deleted, her legion of fans stepped in, sharing not only that she earned that hard-fought soda but that there was likely a very good reason she was on her phone.

The Facebook post has sparked a heated debate in India about the “shaming” of alleged harassers on the internet. In her post earlier this week, Kaur said a man on a motorbike made obscene remarks to her at a traffic light in Delhi. She reported the incident to the police but also uploaded a picture of the man, which has since been shared more than 130,000 times.

Unusually, the police acted on her post: they arrested a man, Sarvjeet Singh, and charged him with sexual harassment, criminal intimidation, and insulting the modesty of a woman, according to local reports.

The public mood initially seemed to be supportive of Kaur… Then came a twist in the story. The alleged harasser, Singh, who has been released on bail, denies the allegations and went public too, to accuse Kaur of courting publicity and using the incident to further her own political causes.

Are you indulging in body shaming via Twitter — perhaps without even being aware? Dove and Twitter will be happy to analyze your tweets and let you know.

In a partnership announced Saturday at SXSW, the two are unveiling the #SpeakBeautiful Effect tool, which allows users to retweet an invitation from the @Dove handle via accounts they want analyzed. Dove will tweet the user back a link with a personalized analysis of their tweeting tendencies in minutes.

New Dove research shows 62% of girls wish social media would “teach and empower them about body positivity,” so this is an effort to that end. Working on the #SpeakBeautiful project are Edelman Razorfish, VaynerMedia and Mindshare. 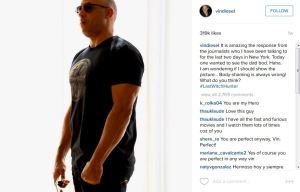 [Vin] Diesel, the actor in the “Fast and Furious” series, posted a response to the accusation he had a “dad bod” on his [Instagram] feed over the weekend, writing, “Body-shaming is always wrong!” He then followed up with a shot flashing his (pretty pronounced) abs.

It suggests that the social media platform could become something of a soapbox for this particular issue. Perhaps even the most effective soapbox.

It makes sense, after all, since body image, while a psychological issue, begins with optics, and Instagram is first and foremost an optical platform. Mr. Diesel’s words convey his position, but his picture shuts the debate down.

In any case, I don’t think this was necessarily part of the Instagram remit from the start, but the folks who administer the platform might start paying attention. There’s a lot of focus at the moment on what the platform can do for fashion, and on its retail potential, but it seems to me it may have at least as much, if not more, potential as the fulcrum of the national conversation on size and health.

Call-out culture refers to the tendency among progressives, radicals, activists, and community organizers to publicly name instances or patterns of oppressive behaviour and language use by others. People can be called out for statements and actions that are sexist, racist, ableist, and the list goes on. Because call-outs tend to be public, they can enable a particularly armchair and academic brand of activism: one in which the act of calling out is seen as an end in itself.

What makes call-out culture so toxic is not necessarily its frequency so much as the nature and performance of the call-out itself. Especially in online venues like Twitter and Facebook, calling someone out isn’t just a private interaction between two individuals: it’s a public performance where people can demonstrate their wit or how pure their politics are. Indeed, sometimes it can feel like the performance itself is more significant than the content of the call-out. This is why “calling in” has been proposed as an alternative to calling out: calling in means speaking privately with an individual who has done some wrong, in order to address the behaviour without making a spectacle of the address itself.

I’ve struggled with my weight for my entire life… So I needed to set some ground rules for myself to lose weight, ground rules that I felt were reasonable to follow for the rest of my adult life. Here’s what I did:

3. I posted that weight daily on Twitter. But it doesn’t matter where. It can be on Facebook or your blog or whatever. Shit, you can print it out and stick it on your office cube every day. What I found doing this is that it 1) gave me a public incentive to stick to a goal; 2) garnered support from people. Most Americans struggle with their weight, and most of them sympathize with someone else trying to get healthier. Support helps. Maybe some people will tease you, but that’s its own incentive anyway. Part of losing weight is acknowledging the fact that you have issues with food. And holy shit, do I have issues with food.