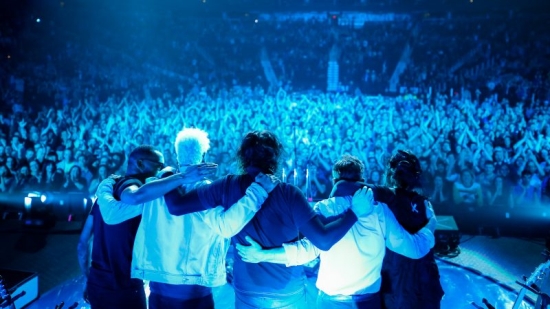 A few nights ago I saw Jack White in concert. It was a wonderful night, and a big part of that was due to a new rule he has imposed on all his tour dates: no phones.

The no-phones policy illuminated something about smartphone use that’s hard to see when it’s so ubiquitous: our phones drain the life out of a room. They give everyone a push-button way to completely disengage their mind from their surroundings, while their body remains in the room, only minimally aware of itself. Essentially, we all have a risk-free ripcord we can pull at the first pang of boredom or desire for novelty, and of course those pangs occur constantly.

Every time someone in a group of people deploys a screen, the whole group is affected. Each disengaged person in a crowd is like a little black hole, a dead zone for social energy, radiating a noticeable field of apathy towards the rest of the room and what’s happening there. 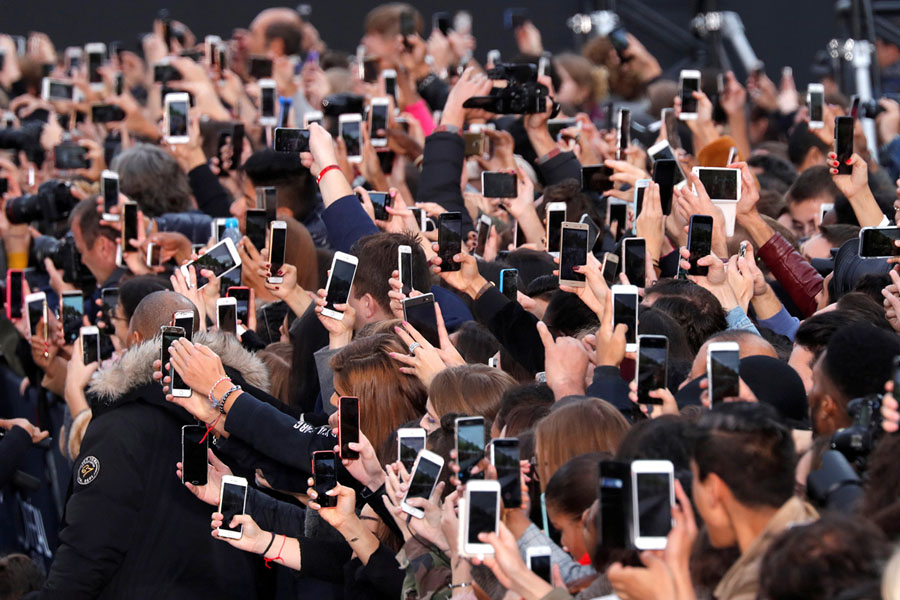 Excerpt  from this article (full of excellent photos!):

With so many devices in so many hands now, the visual landscape has changed greatly, making it a rare event to find oneself in a group of people anywhere in the world and not see at least one of them using a phone. Collected here: a look at that smartphone landscape, and some of the stories of the phones’ owners. 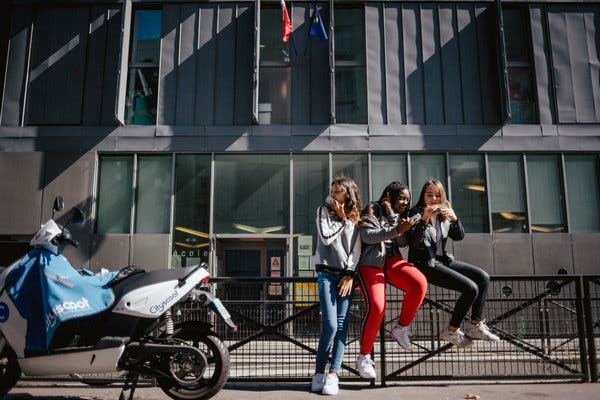 The eighth-grade girls already know what to expect from France’s new smartphone ban in all primary and middle schools because their school voluntarily instituted one last year.

“Annoying,” was the assessment of Zoélinh Masson, 12, as her friend Grace Blahourou, 13, agreed.

Still, they said that with no smartphones, students did talk to one another more.

France’s education ministry hopes that its smartphone ban, which took effect at the beginning of September and applies to students from first through ninth grades, will get schoolchildren to pay more attention in class and interact more, and several studies suggest such correlations. 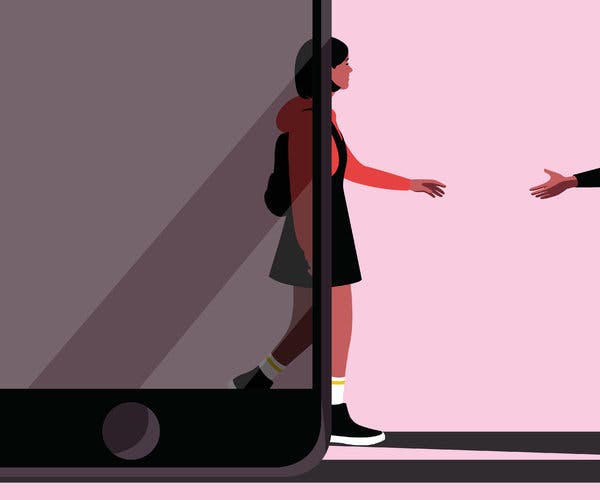 …I’ve come to believe that conventional wisdom about the relationship between troubled kids and their favorite technology is wrong.

Although some research does show that excessive and compulsive smartphone use is correlated with anxiety and depression, there is a lack of direct evidence that devices actually cause mental health problems.

In other words, there simply does not yet exist a prospective longitudinal study showing that, all things being equal, teenagers who use smartphones more often or in certain ways are more likely than their fellows to subsequently develop mental illness.

In the meantime, we can’t just blame the machines. This is especially important because if smartphones aren’t a direct cause of teenagers’ mental health struggles, their use might instead be a crucial way in which these struggles are expressed. This calls for a different set of solutions.

As much as I use my smartphone, I don't think I've ever seen it in any of my dreams. pic.twitter.com/1H98pFX9Nv

[This theory] basically suggests that the reason why we dream is that dreams allow us to work through our anxieties and our fears in a more low-risk environment, so we’re able to practice for stressful events,” says Robb. This hypothesis also posits that because our dreams are an evolved defense mechanism, we tend to dream more often about fears and concerns that were relevant to our ancestors — so, less about, say, hacking, and more about running from wild animals. “People tend not to dream quite as much about reading and writing, which are more recent developments in human history, and more about survival related things, like fighting, even if that has nothing to do with who you are in real life,” says Robb.

More comfortable online than out partying, post-Millennials are safer, physically, than adolescents have ever been. But they’re on the brink of a mental-health crisis.

…the allure of independence, so powerful to previous generations, holds less sway over today’s teens, who are less likely to leave the house without their parents. The shift is stunning: 12th-graders in 2015 were going out less often than eighth-graders did as recently as 2009.

Today’s teens are also less likely to date. The initial stage of courtship, which Gen Xers called “liking” (as in “Ooh, he likes you!”), kids now call “talking”—an ironic choice for a generation that prefers texting to actual conversation. After two teens have “talked” for a while, they might start dating. But only about 56 percent of high-school seniors in 2015 went out on dates; for Boomers and Gen Xers, the number was about 85 percent.

…Even driving, a symbol of adolescent freedom inscribed in American popular culture, from Rebel Without a Cause to Ferris Bueller’s Day Off, has lost its appeal for today’s teens. Nearly all Boomer high-school students had their driver’s license by the spring of their senior year; more than one in four teens today still lack one at the end of high school. For some, Mom and Dad are such good chauffeurs that there’s no urgent need to drive. “My parents drove me everywhere and never complained, so I always had rides,” a 21-year-old student in San Diego told me. “I didn’t get my license until my mom told me I had to because she could not keep driving me to school.” She finally got her license six months after her 18th birthday. In conversation after conversation, teens described getting their license as something to be nagged into by their parents—a notion that would have been unthinkable to previous generations.

Given the ubiquity of smartphones among today’s kids, gaining insight on usage patterns and mobile motivations is an ongoing endeavor—and one that Nielsen has undertaken in its most recent Mobile Kids Report.

Released today, the Q4 2016 study examined smartphone usage among US kids ages six to 12, as well as their parents’ attitudes towards mobile devices and wireless services.

While the trend in homes is to increasingly spend more time talking to virtual assistant Alexa, a recent report suggests that we reach for our smartphones within 15 minutes of waking up and our phones will likely remain with us throughout the day long after we have said goodnight, Alexa. 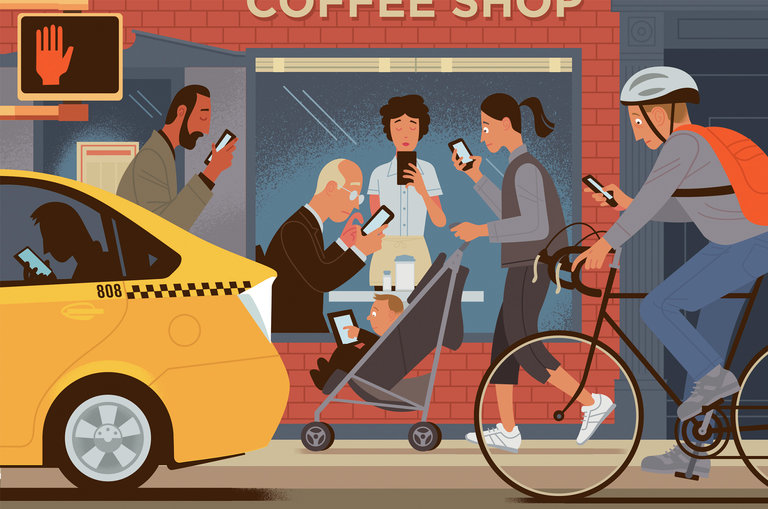 “Most people now check their smartphones 150 times per day, or every six minutes,” Ms. Colier wrote. “And young adults are now sending an average of 110 texts per day.” Furthermore, she added, “46 percent of smartphone users now say that their devices are something they ‘couldn’t live without.’”

In “The World Unplugged Project,” investigators at the University of Maryland reported that “a clear majority” of students in the 10 countries studied experienced distress when they tried to go without their devices for 24 hours. One in three people admitted they’d rather give up sex than their smartphones.

I fear we are turning into digital robots. Will future generations know how to converse with one another face to face? Will they notice the birds, trees, sunrise and the people with whom they share the planet?

Instead of visiting art galleries, attending concerts or walking on picturesque wooded paths, one woman I know who came to Woodstock, N.Y., last summer spent the weekend on her iPad communing with her many “friends” on Facebook. All I could think was “What a waste!”