How much time would you say he spends on his phone?

Well, a lot. He used to do this thing that would just drive me insane where, while I was talking to him, he would be doing work on his phone, and he’d just be like, “Uh-huh, uh-huh, uh-huh.” And eventually I’d be like, “OK, what do you think?” And he’d be like, “Uhhhhhhhh.”

So what we convinced him to do was, when he needs to do work stuff, but he wants to spend time with us, and we catch him working like that—he goes into another room, does the work he needs to do, and then he can come back and give us his full attention.

So how did you get him to do that? Did you have to stage an intervention?

No, he sort of came up with it a bit. But also I’ve found that when I’m playing tennis, even just ping-pong, it’s great because we’re both so focused on each other.

Does your dad use Twitter a lot on his phone?

How do you know when he’s tweeting?

So you’ll be at a family event, and you’ll look at Twitter just to see if your dad is tweeting?

Definitely. I’ll be like, “Dad, you retweeted something 30 seconds ago.”

But usually at those family events I’m retweeting things too.

Would you say your parents have a healthy work-life balance?

I think my dad’s definitely gotten better about it. A couple years ago, he worked more, but he’s definitely figuring it out now, it’s good.

What do you think motivated him to figure it out?

Just a lot of “Dad, get off your phone. Daddy, we’re talking to you.”

And WTF has happened to our culture when we just take it as fact that everyone needs to have multiple jobs and work as a cab driver and rent out every square inch of space in their apartment and be a task rabbit gopher who waits in line for tickets when they’re not walking dogs or temping and we all just chalk it up to “progress”??? In the old days, this meant your life was falling apart. Now it just means you’re part of “the sharing economy.”…

These tech companies position themselves as heroes. They talk about “changing the world” constantly. Yet all they do is churn out technology for rich, white dudes in their 20s/30s who live in big cities and want apps to fill in the blanks for what mommy used to do.

Mommy used to pick me up from soccer practice. A: Uber.

Mommy used to do my laundry. A: Flycleaners.

Mommy used to clean my room. A: Handy.

Mommy used to buy me groceries. A: Blue Apron.

Mommy used to cook me food. A: Seamless.

John and Sherry Petersik built a cult following with their website, Young House Love. Then they tried to walk away.

…As the social-sharing economy expanded, so did the Petersiks’ business, which is when that happy setup started to break down. Grace Bonney, the creator of Design Sponge, points to shifts like the rise of Pinterest and Instagram, which, she says, “have all but killed blogs. We all have homes, we all talk about the pretty things we want to buy; that’s not unique anymore. The only thing that sets us apart is who we are and what our lives are.” Bonney explains, “You will not find a single blog with that kind of cult following that doesn’t have a personal connection. But what creates that kind of devoted following can also be problematic. At some point you have to ask: Do you want your life to become your business?”

By 2011, YHL was getting over 5 million monthly page views (with a million unique visitors), and the Petersiks were regularly working a second shift after Clara’s bedtime and throughout weekends and vacations. Family outings had to include something “bloggable,” like a stop at an antique store. Each holiday required fresh seasonal content. The Petersiks were also picking up all those side projects that felt like huge wins, but required a tremendous amount of additional work. They admit the blog made money “a nonissue” in its final years. “For a long time, we thought we were doing okay if we could duplicate our salaries from our old advertising jobs; then it got to the point where we could bring in much more,” says Sherry. “But I kept saying, ‘I don’t want more money, I want more time.’” She’d spend school field trips sneaking onto her phone to respond to comments from the zoo or the aquarium. “I felt like any day where I was being a great blogger, I was being a bad mom and vice versa,” Sherry says. She and John both worried that their marriage was being reduced to “essentially co-workers.” …

Meanwhile, their audience’s demands to be let in on their lives only grew. Back in 2010, it took them four days to mention the birth of their daughter on their blog, but when Teddy was born in 2014, John says, “It was like, okay, we have a few hours to get something for Instagram.” Sherry pauses when he says that, but she doesn’t disagree. “Where we ended up was kind of a reality show in itself,” she says. And like all successful reality stars, the Petersiks had built an audience that simultaneously knew everything about them and didn’t really know them at all. 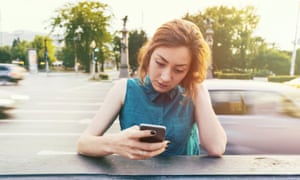 The worst case of “work addiction” I have encountered was described to me by an ex-management consultant. A member of his team – let’s call him Gary – was forced by his employer to take a holiday. The firm saw yet another potential burnout victim on its hands, in what has become a costly epidemic in today’s economy. So Gary bid farewell and set off for sunny Crete for two weeks with his girlfriend.

While he was away the firm noticed something mysterious was happening. Gary’s emails were periodically being cleared in compact 20-minute bursts. He was asked about it when he came back. It turned out he simply couldn’t sit by the beautiful seashore doing nothing all day. He felt as if he was dying inside. So he secretly smuggled his smartphone to the beach and slipped off to the toilet every once in a while to get his email fix. Gary’s co-workers found it hilarious, but also somewhat disconcerting.

Sure, the French have it sweet with a 35 hour work week and five+ weeks of paid vacation. But (Mon dieu!) workers there are still bombarded with job-related emails when off the clock. Almost a million of them won’t need to put up with such rude intrusions anymore, though. A legally binding deal signed by tech industry employers and several unions in France means many companies are now forbidden to contact employees electronically after their work day is over.